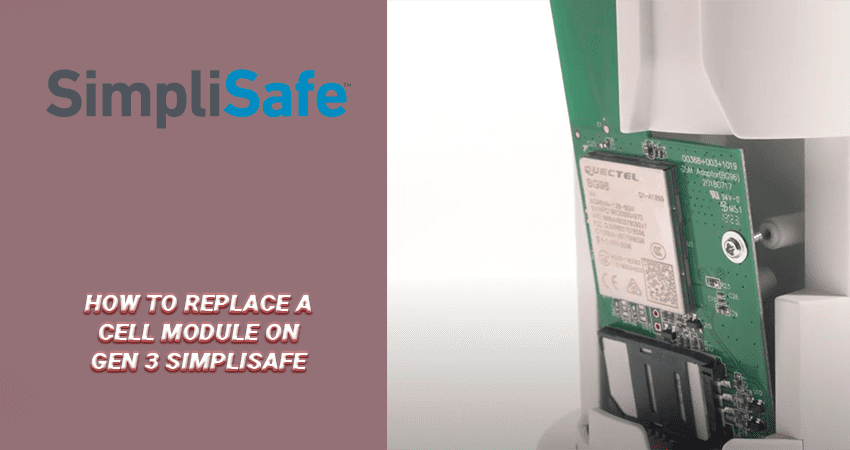 How to Replace a Cell Module on Gen 3 SimpliSafe

The Simplisafe Gen 3 is a great security system that can be used to secure your office or home It comes with Wi-Fi and cellular connectivity along with a professional monitoring system for additional protection. In this guide, we will tell you how to replace the cellular module in Simplisafe Gen 3.

How to Replace a Cell Module on Gen 3 SimpliSafe

You will need a small Phillips head screwdriver before you can replace the module. Just follow these steps:

1. Make sure that the security system is disarmed. Unplug the power cable from the bottom of the base station

2. Use the screwdriver to remove the single screw covering the battery compartment. Remove one battery to ensure that there is no power going to the base station

3. Rotate the cone of the base station counterclockwise and then lift it off.

5. Now gently pull the cellular module out of the base station and unplug the brown connector from the module by pulling the wires. Do not pull it by the board as it could damage the connectors

6. It’s time to install the new replacement module inside the base station. First, plug the connector from the base station into the bottom right corner of the module. Ensure that it is fully plugged in and if it doesn’t fit then do not try to forcefully plug it in. You can try connecting to the connector on the left instead

7. Now insert the new module at a  45-degree angle into the base in the slot at the base station. It should sit in these plastic tabs highlighted in orange and blue colours above.

8. Move the connecting wire out of the way and gently push the replacement module back into its place.

9. Tighten the screws into the module at the base station. Tuck the wires back inside after the module is screwed. In case the wires are twisted, leave them as it is.

11. Slide the cone back into the base station and then rotate it until it snaps into its place.

13. Plug the power cable into your base station and your device will be connected to a 4G network in around 1-2 minutes.

14. It’s time to test the new module you just installed in the base station. Press the menu button on your keypad and enter the master PIN. Scroll down and then select the Test mode. This will send a test signal that will let you know whether the account is online or not.

That’s it, you have now successfully replaced the cellular module on your SimpliSafe Gen 3 security system.