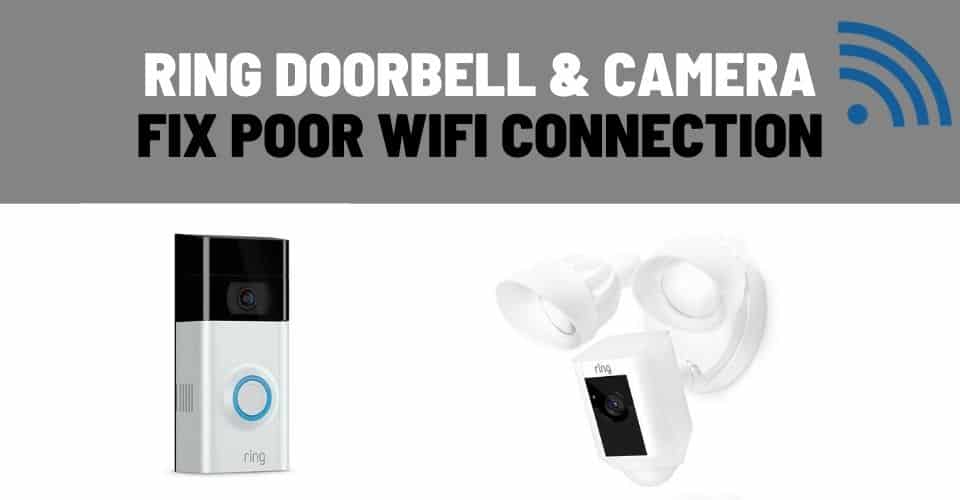 How to Fix Poor WiFi Connection and Improve Signal Strength?

A few highly effective ways to fix your WiFi connection and improve the signal strength for your Ring devices include switching to a different WiFi bandwidth, using a WiFi mesh system, getting a Ring Chime Pro, and taking care of any WiFi interference.

1. Switch to a Different Bandwidth

As a result, changing your WiFi band to 2.4 GHz may fix your poor WiFi connection as the Ring devices will get a stronger signal due to the coverage boost.

How to change your WiFi band to 2.4 GHz?

Changing which bandwidth your WiFi router is currently running on is actually rather simple. In most cases, this can easily be accomplished through the app that comes with your internet router. Simply access the app, find the network settings, locate where it specifies which band you’re using, and switch it to 2.4 GHz. That’s all!

2. Use a WiFi Mesh System

If this is not the first time you’re experiencing poor WiFi stability in your home, then investing in a home WiFi mesh system will almost always solve this type of problem. WiFi mesh systems may not be as cheap as general WiFi routers but they are always worth getting as you’re likely to never experience internet problems ever after installing a mesh system.

Unlike standard WiFi routers, mesh systems work by connecting another device to your router called a satellite module. This satellite is placed at a different point in your home, preferable to a spot with very poor WiFi signal reach. This significantly expands the coverage of your WiFi and greatly improves signal strength. As a result, the closer the satellite module to your Ring camera and doorbell, the better the signal strength will be.

A cheaper option compared to a WiFi mesh system that does a similar job is a Ring Chime Pro. The Chime Pro is essentially a WiFi extender. This means that it will boost the Wifi signal strength similarly to how a WiFi mesh system will, just not as effective. However, this isn’t a bad thing as, usually, a slight boost is what all that your Ring devices require to start performing optimally once more.

All you have to do is get a Chime Pro from Ring, plug it into an outlet in your home, and let it do its magic. The Ring Chime Pro will connect to your router and you can then connect your Ring camera & doorbell to the Chime Pro instead of directly to your router.

Lastly, the problem could be as simple as too much interference from other devices that are causing your poor WiFi connection. You could try disconnecting your other devices from the WiFi but that isn’t really a sustainable fix.

Instead, try logging into your network admin console and try changing the WiFi connection channel. Living in an area such as an apartment building probably has too many WiFi routers around. Most of those routers are running on the same network channel. By changing it, you have a high chance of improving your WiFi signal strength and fixing this issue.

Use RSSI to Check Signal Strength for Your Ring Devices

Before you decide to apply any of these solutions, it’s always a great idea to diagnose your Ring devices first. This is when you take advantage of the RSSI feature in the Ring app. Simply open the Ring app, go to Device Health Settings, and check the RSSI status.

Here are a few crucial things to know:

READ NEXT: Ring Doorbells, Who Makes Them?